Sometimes an oyster obsession becomes a vocation. For a couple of Mobile Bay area teachers, the obsession spawned a high school curriculum. Julian Stewart, Aquaculture Program Director at Alma Bryant High School in Irvington, Alabama, has taught at the school for seventeen years. He recently started the Half-Shell High School program with his wife and fellow teacher, Lynn, even securing an EPA grant, to help promote and preserve off-bottom oyster farming in the area. We were able to catch up with Stewart for a Q&A to reflect on the changes he sees in the industry, his thoughts on its future, and the difference this program is making.

How did the idea for the Half-Shell High School begin?

Lynn is the marine biology teacher here at Bryant High School, and she has been involved with the Mobile Bay Oyster Gardening Program for about 10 years. That’s how we got our start with oysters. But the program really started with a guy with Auburn University, Dr. Bill Walton, who came here from the Atlantic Coast and brought the concept of off-bottom oyster farming to the area. After seeing what he was doing, it struck me that it was the perfect aquaculture species. It’s also something we thought was very sustainable. And a lot of times you need a catchy title so we came up with “Half Shell High School.” It was a slow evolution. We’re really excited about it.

What do you hope to accomplish with the grant and new project?

Here on the coast, I have a lot of students whose families are in the seafood business. I can’t tell you how many of them said, “We used to have an oyster shop but it’s closed now because there aren’t any oysters.” One of the main things we want to do is restore their heritage in a way that’s sustainable. Off-bottom oyster farming seems like the best way. We’re trying to get a service-learning farm to help students, whether they want to learn how to farm oysters, how to do restoration, prepare them to work right after school, or go to college and get into the field. It’s been successful because it seems like students remember the things that they learn from doing.

How have you seen the oyster population change throughout your career?

Oh, wow, I’ve been around for a while now. But I remember when I was in graduate school back in the 1970s, I was going to school down at Dauphin Island Sea Lab. Back in those days there were oyster reefs on both sides of the bridge as far as you could see. And there were oyster boats out there. That’s just a thing of the past now. They’re nonexistent. The natural oyster population has severely declined. I doubt it’s even 10 percent of what it used to be––at least in this area.

Can you talk about the native oysters and a bit on the impact that the recent catastrophes have had on them?

Probably the biggest catastrophe for the oysters around here was hurricanes Ivan and Katrina. Most of the remaining oysters were buried by sediment from those storms. Here, oysters didn’t have a bad result as of the Deepwater Horizon oil spill. I know that a lot of places did. We got some oil here, but I think compared to what the hurricanes did here, the oil spill was minimal.

Any unique partnerships forming as part of the Half-Shell High School initiative?

The grant from the EPA is pretty unique. They said that this is the first time that they’ve ever awarded a grant to a high school. We’ve had a lot of partners like Auburn University and Dauphin Island Sea Lab, for quite a while now. Another partnership is with one of the newly formed oyster farms, Murder Point Oyster Company down in Sandy Bay. They’re providing property on the bay for us to set up our oyster nursery, and a pier and boat lift so we’ll have a place to keep our boats. They market the oysters for us. Their kids went to school here so they’re looking to give back and they really want to help the school. It’s great because they’re providing so much service for us. And they have some of the best oysters I have ever eaten.

What have you seen in the industry since the project started?

When we started there weren’t any oyster farms and now there are about 10 with more planned. Right now Alabama has more off-bottom oyster farms than any other state along the Gulf Coast. It’s growing fast, and we’ve only scratched the surface on what it can be.

What has the student reaction been to the project?

The students who have families in the business are all for it. They also think it’s kind of neat because, how many high schools have a couple of boats? And for class they have to get out on the water. It’s always been very positive.

We have an outdoor pond where we grow fish here at the Irvington campus. It has always been a popular class. What’s really made the difference is not only that the people here want to remain in the seafood industry, but also that they want to be out here on their boats. This gives us a chance to do that. All the high schools in Mobile now have a signature academy, and since we’re on the coast, my wife and I convinced the administration to start a coastal academy. We train students for careers involved on the water whether it’s the seafood industry, marine biology, cruise ships, or oil companies.

What is the reaction of the community?

This used to be the second largest seafood area on the coast. It’s declined 90% over the past 30 years, so the reaction has been positive.

How will the project impact the community?

“There are a number of different brands here in south Alabama such as Point aux Pins, Murder Point, and Cedar Point, so Half-Shell High produces Bonus Point oysters.” — Julian Stewart

Do you see a renewed interest in oyster conservation?

Yes, and I think some of the reason why is because the public is being educated on the importance of oysters. It makes a difference when they find out how many other species are dependent on oysters and oyster reef habitat. They can see the connections and why we’re seeing a decrease in some seafood species. Also, the value of quality half-shell oysters is so much better than tonged oysters headed for the shucking market. They see how oyster farming can be profitable and sustainable. The interest is constantly growing.

What are some of the biggest challenges facing oyster conservation?

Unfortunately, I have been reading about how on the West Coast that they have seen ocean acidification for the past several years. The ocean’s pH has been going down. Baby oysters out there are having trouble forming their shells. After talking with the hatchery manager at the Auburn University Shellfish Lab, I see they’re starting to think that they’ve seen the same thing here when trying to grow oysters with water they pumped from the gulf. They weren’t having success until they started raising the alkaline and hardness of the water to raise the pH. I hope that’s just a one-time, short-term occurrence. It may be the beginnings of a really big challenge for us.

Why do you see this project as an important one the region and the South?

Oyster production from the wild is going downhill. On a global scale the total amount of seafood produced by aquaculture exceeds the natural harvest. And that ratio is getting broader every year. The East Coast and West Coast have been known for their oysters and the gulf was a bit of the unknown. But in my recent travels, I think our oysters are actually superior to them. This is a big step for people to know how great gulf oysters really are. It can’t help but promote the entire southern region. 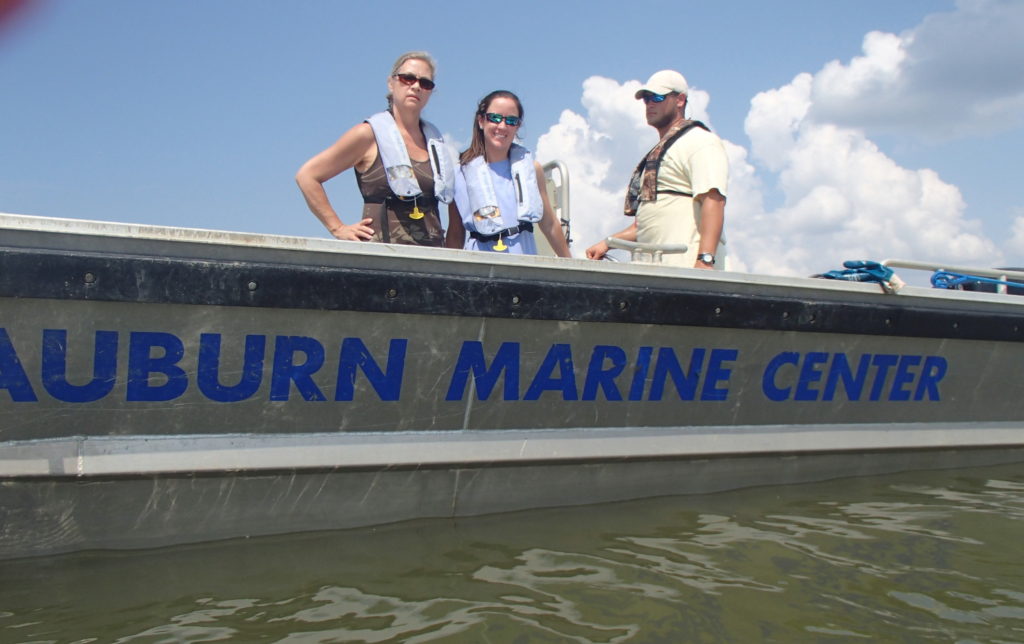 And, on a lighter note, what’s your favorite way to eat oysters?

Well, the best oysters, of course, are ours! There are a number of different brands here in south Alabama such as Point aux Pins, Murder Point, and Cedar Point, so Half-Shell High produces Bonus Point oysters.

My favorite way to eat them is something I just recently tried. I went on a diet where you had to cut back on carbs. So I crushed some fried pork skins and breaded fried oysters with that. They were nice and crunchy. But next to that, I love a good cold, salty oyster with a little bit of Tabasco and horseradish. I don’t think it gets any better. So to quote Mr. Oliver Wintzell (of the historic Wintzell’s Oyster House), I like “Oysters––fried, stewed or nude.”

More about Alabama Oysters and Q&As with Oyster Obsessed Folks